Taffy Shop's gourmet salt water taffy is guaranteed fresh. Made with love in the USA.


Top Rated By Our Customers 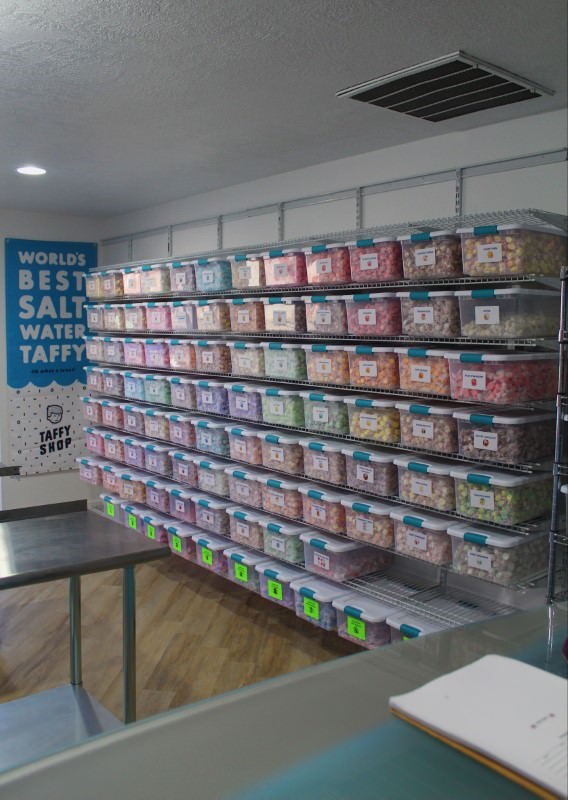 We make all our salt water taffy in small batches so it's fresh and super soft. We offer a huge variety of over 80 flavors of taffy to choose from including traditional flavors like Licorice, Very Vanilla, Sweet Peppermint, and Banana Dream to more inventive flavors like Movie Popcorn, Blueberry Muffin Crumb, Pomegranate, Granny's Apple Pie, and more! All our taffy is peanut and gluten-free and is manufactured in a facility that doesn't use those ingredients. 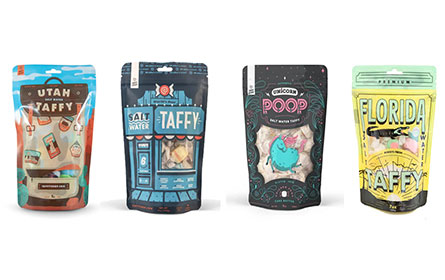 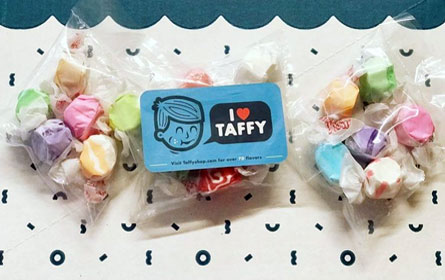 Just luv their candy they have many very good flavors that'll send ur taste buds in overdrive. They are hands down the best Taffy flavor makers yet.

Lots of flavors, all good

Hard to find but well worth it!

Thank You for the Great Feedback!

Thanks for letting us know we are doing a great job! Would you mind sharing your review? Click Copy below and choose Google, Facebook or Twitter. 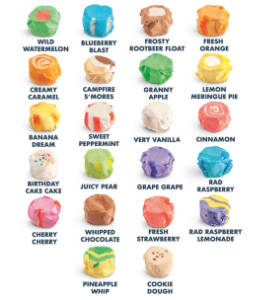 How Did Salt Water Taffy Get's its Name?

Taffy is very popular in beach resorts and gift stores and in various places including Las Vegas and right here in St. George, Utah. We also sell Salt Water Taffy online at Taffyshop.com. According to Carouselhotel, It is believed that in 1888 a man named David Bradley had a candy store that was flooded during a storm. When this occurred the taffy he had at the store got soaked with ocean salt water. A young girl came to the store looking for taffy and he joked that he only had salt water taffy. She purchased the taffy and it became very popular. It was believed that it became known as salt water taffy because it was sold near the ocean and perhaps because of it's origins.

According to TaffyShop.com, the most popular saltwater taffy flavors are peppermint, vanilla, banana, watermelon, frosted cupcake, cotton candy, raspberry, strawberry, licorice, and caramel swirl. With over 70 varieties of flavors, best sellers and which flavors are most popular change frequently but these are some overall flavors that sell most frequently.

The History of Salt Water Taffy

Saltwater taffy is a variety of soft taffy that was produced in the 19th century in Atlantic City, New Jersey which started in the late 19th century.

Saltwater taffy is composed of sugar, cornstarch, corn syrup, glycerine, water, butter, salt, flavor, and food coloring. When taffy was originally invented it was first cooked in copper kettles over open coal fires, cooled on marble slabs, and pulled from a large hook.

For all those that love saltwater taffy, we highly recommend visiting our taffy store and gift shop in St. George, Utah, or for online ordering, we have our taffyshop site. We offer birthday gifts and various specials including the option for gifts and a variety of bags of taffy. We have over 80 flavors of gourmet taffy to choose from.

Taffyshop has been in business for over 20 years and people love to ask why our taffy is so good. Nostalgic memories take you back when you unwrap it and the smile that comes from enjoying the simplicity of a mouthwatering treat. That's part of the secret of what makes taffy so good.

We have produced over millions of pieces of taffy and we offer a large variety of various flavors of gourmet taffy. Our taffy has gone from the shores of the Great Salt Lake to the shores of the internet. It took persistence, but after constant experimentation and customer feedback, we proudly boast the best salt water taffy in the world.

Taffy Shop's origins started in 1893 the Saltair resort was opened on the shores of the Great Salt Lake in Utah. In boasting rides, swimming, dining, music, and dancing on what was boated as "the world's largest dance floor". They introduced saltwater taffy to their guests. The taffy was pulled and cut by hand. It was an instant hit.

1920 - Over 500,000 visitors each year, the demand for taffy was hard to keep up with. Traditional flavors of taffy included vanilla, chocolate, licorice, cinnamon, banana, cherry, molasses, and root beer.

1920-1970 - The Great Depression, World War 2, Drout and Fires - During this time Salt Air was rebuilt bigger and better after being destroyed by a fire and was dubbed "The Coney Island of the West". The demand for Salt Water Taffy was hard to keep up with... until a drought left the shoreline a half-mile from the resort. Due to another fire, there would be no more saltwater taffy and no resort for decades.

1993 - Our founder purchased Salt Air and reopened its doors. In addition to opening the resort, he brought Taffy Shop Salt Water Taffy to the hallowed shores of the Great Salt Lake.

Today - Taffy Shop has sold millions of pieces of taffy and offers over 70 flavors of gourmet taffy.